(For the visitors who got here via Dramapanda's link: hello and welcome! The novel translations for Poison Genius Consort are here.)

Hey guys! So I've been following the news for the upcoming PGC drama series for awhile now, and it looked like we weren't getting anywhere. But just yesterday, Dramapanda posted an article with an update and a tentative filming date: July 10th!

It's going to be called Legend of Yun Xi (芸汐传). The expected leads are Ju Jing Yi of SNH48 for the role of Han Yunxi, as well as male leads Zhang Zhe Han and Mi Re.

Now for a quick peek at the poster image again~

From an earlier source on Baidu, I've written a rough translation of the plot below:

Episodes: 30, 40 (sources vary) Lead Role: SNH48 (now confirmed as Ju Jing Yi, whom I thought was especially pretty in Novoland) Keywords: Period drama, romance, transmigration (not sure if they’ll keep this part though)

Synopsis (Be aware that drama adaptations may vary wildly in plot details from the novel): Han Yunxi is the daughter of an imperial physician who lost her mother when young, but maintains a cheerful and optimistic disposition. Yunxi is naturally talented in medical science and proficient in traditional medicine, but suffers from the jealousy and avoidance of others. By a stroke of fate, Yunxi marries the Duke of Qin, Long Feiye, and becomes embroiled in the changing politics of the imperial court. Yunxi relies on her high-level medical skills, wise, far-sighted brain, and compassionate heart to expel the poisons of a great official, get rid of secret agents for the Duke of Qin, eliminate the plague for the common citizens, and cure the crown prince’s strange illness.

Yunxi’s kindness as a doctor not only earns her the appreciation of the masses, but helps the Duke of Qin overcome many nefarious plots, including the rebellion of the Chu siblings. After a series of unfortunate accidents, Yunxi’s medical skills grow even more unparalleled and she even gains the admiration and adoration of the Duke of Qin. Both of them take fame lightly in favor of digging into the medical field. In the end, they leave the clamor of court intrigue behind them and go in seclusion in the mountains, living a happy life free from worldly cares.

Original Chinese (if you want to try translating your own version!): 韩芸汐身为太医之女，自幼丧母，历经各种磨难，依然保持积极向上的乐观心态。芸汐颇有医学天赋，精通传统医术，却因此遭受各种妒忌和排挤。机缘巧合之下，芸汐嫁给了秦王龙非夜，从此陷入波谲云诡的宫廷斗争之中。芸汐凭借高超的医术、睿智的头脑和善良的内心，为朝中大臣破解剧毒，帮助秦王识破内奸，为全国百姓解除鼠疫之祸，成功救治感染怪病的太子。芸汐不仅以医者仁心的态度深受百姓爱戴，而且协助秦王打破了各种祸国殃民的阴谋诡计，平息了楚氏兄妹倒行逆施的动乱。经历过一系列人生变故，芸汐的医术更为精湛，而且赢得了秦王的倾心爱慕。两人看淡名利，共同钻研医术，最终离开喧嚣的宫廷，归隐山林，过上了与世无争的幸福生活。

With my limited knowledge of dramas (haha), let's rant a bit about the announced leads!

Ju Jing Yi in Novoland: The Castle in the Sky. A beauty is a beauty, even with blue contact lenses. xD

A “once in a 4,000 year beauty” who's also a top star in the SNH48 idol business! I think she's quite pretty and cute, and would fit the image of young Han Yunxi (a 17~18 year old girl) very well aesthetically. She might not be a perfect actress, but I thought she did a lovely job with her role as Xue Feishuang in Novoland: The Castle in the Sky. This is probably the nth time I've brought that drama up, but her character there was strong enough to leave an impression on me, hehe.

Those of you who aren't afraid of spoilers for that series can watch an exclusive cut of her acting (and dancing/crying/being evil) scenes for episode 20 and episode 21 via bilibili. She really hit the emotional notes there, it's great~

This was the image that made me think of Han Yunxi when I first saw her. Beautiful yet self-possessed.

One of her earlier projects, The Unexpected. I find that her face seems to change from different angles/make-up, etc. Almost couldn't recognize her at first glance in this one.

And now to imagine her in motion! σ(≧ε≦σ) ♡ Could her unveiling scene on the wedding day be something as breathtaking as this? 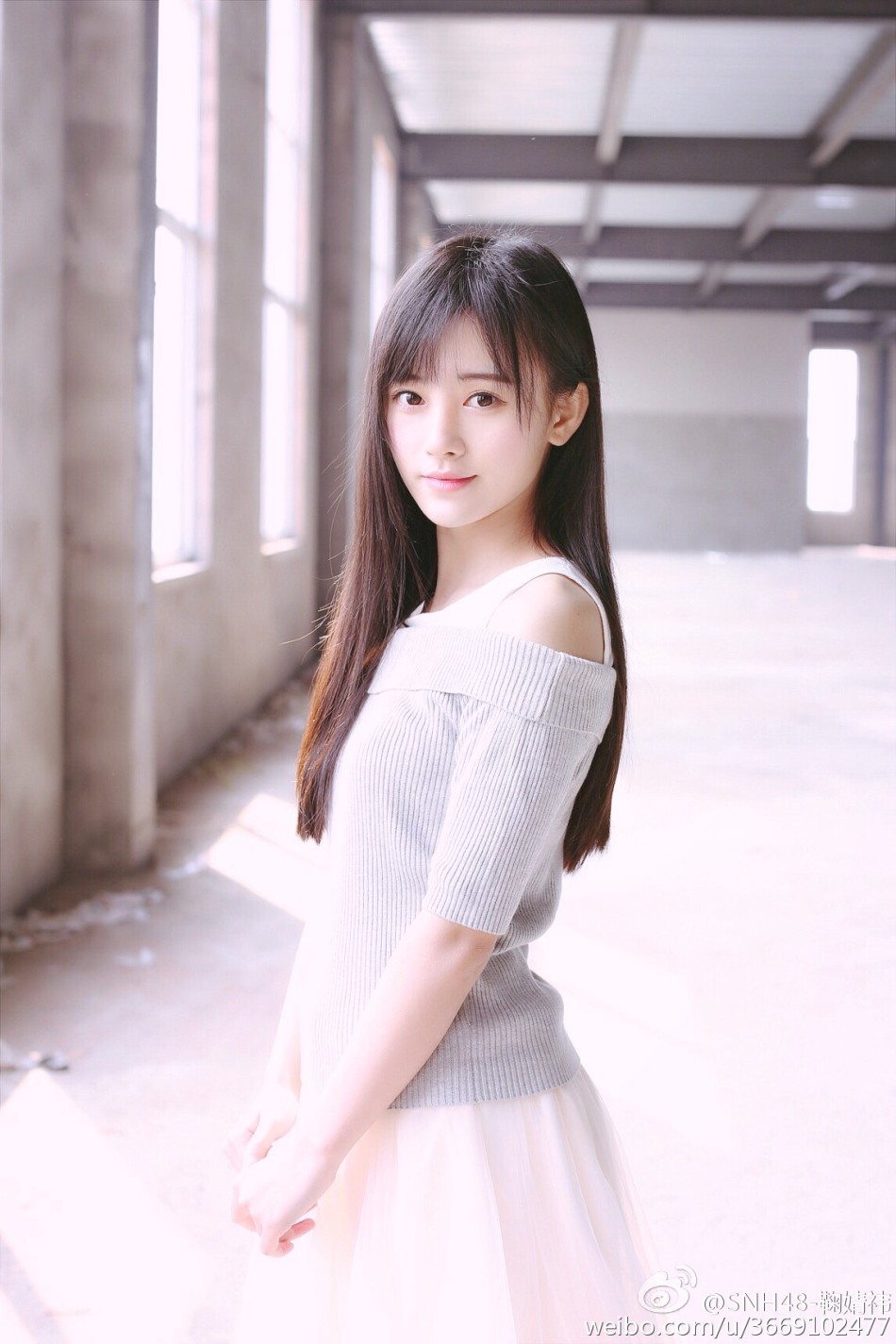 Our leading lady, everyone! Now when will Han Yunxi enter the idol business, hmm?!

Oh right, and she sounds quite sweet when she sings, too. ヽ(o´∀`)ﾉ♪♬ Admittedly, I don't know much about this guy so I had to dig around. He has very distinctive eyebrows and interesting eyes, but I haven't seen his acting in any of the series above so I can't be a judge for that! If any readers know more, feel free to chime in in the comments below.

Just from initial impressions though, he seems more boyish and less cold than I imagined. Maybe he's playing Long Feiye, maybe one of the other leads, but I've yet to get a sense of the Absolute Zero chill from him that Long Feiye emanates so well. Well, guess we'll have to wait and see! xD

Meanwhile, I'll just share some nice images I've found around the Internet. :3 A picture for a thousand words, people! Will we ever get to see Long Feiye cry? Can we add it in anyways, because this guy has pretty tears. (°◡°♡). As long as he can be convincingly cold enough then I'm willing to take him!

Mi Re in Beauty Maker/Cosmetology High. I...I think we've got our Gu Qishao.

Again, I don't know much about this guy, but it looks like his performance in the Beauty Maker/Cosmetology High should help him a loooot if he's playing Gu Qishao. They haven't elaborated on which male lead's doing what, but he looks more Gu Qishao than Gu Beiyue or Mu Qingwu to me. Feel free to comment with your own views!

Luckily for us, our two male leads were both in the same series so I can find pictures like this. If this isn't Gu Qishao trying to annoy Long Feiye then I'm a white lotus wannabe! Wah~ 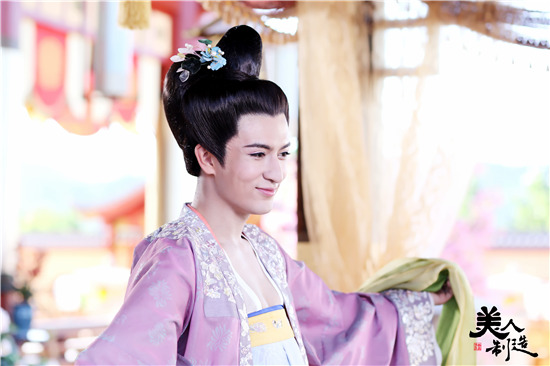 According to the webnovel, Gu Qishao's supposed to be "as beautiful as a woman," but I hope we won't see any actual crossdressing in the drama series. L-leave the pretty to the girls for this one, guys!

He hasn't acted in a lot of period/costume dramas so it's hard to find pics of him; but here's another one from Ban Shu Legend.

I can hear the snarky quips already, pwahaha. (More importantly, if my guesses are correct and these guys really are Long Feiye and Gu Qishao, then where's Gu Beiyue???)

The only point that makes me worry a bit is the fact that Dramapanda mentioned: the current male leads listed with the production are both actors under Yu Zheng, who's pretty notorious for his large "creative liberties" with novel plots. His productions are pretty to look at, but the plots sometimes give me a headache.

Currently, Yu Zheng's working on directing Untouchable Lovers (aka the drama adaptation of A Tale of Two Phoenixes 『凤囚凰』) Dare I hope that we'll get a different producer for PGC?

Ah well, share your thoughts! We should have a nice discussion about this, hmm? ^-^

P.S. Here are all the photoshoot pics that Dramapanda referenced!