Okay guys! I have some time now, so let's get cracking. Long story short, you guys earned 12 out of fifteen possible bonus chapters! Where did everyone go wrong? Read on to find out (and keep reading to the bottom if you're curious about the survey answers too!)

What was the original surname for members of the Shadow Clan, protectors of West Qin's imperial family?

Although Gu Beiyue goes by “顾” now, the original surname of the Shadow Clan was “孤,” which means “lonely, alone.” It looks similar to choice #2, “泒,” so good job if you spotted the differences! This question was a neck to neck race until the majority pulled out a victory at the very end!

Which of the following locations is in the northernmost region of Cloud Realm Continent?

Located north of the snowy mountains in Northern Li, a simple glance at the PGC World Map made by volare’s lovely Yuuko would have yielded you this answer easily!

The following is a list of five physician rankings from Medical City. Pick the choice that lists them correctly from HIGHEST to LOWEST.

Another easy answer if you checked your PGC Tables for the medical ranks tab!

After being introduced to Perplexing Butterly Illusion for the first time, Han Yunxi showed LFY and Tang Li 3 poisons from her bag that could melt away:

This refers to the little adventure in which Long Feiye lent Han Yunxi the Pear Blossom Rain Needles and had her kill 9 assassins. When they finally found the leader of the female poison masters, she was already dead. LFY demonstrated the power of Perplexing Butterfly Illusion by dissolving her corpse, while HYX showed off her own arsenal of toxins.

What did Gu Qi Sha (Pill Fiend) use to prove that Long Feiye's claims about the bottle of Broomcorn Millet Poison were lies?

Where did the first kiss in the novel between LFY and HYX occur?

The first “kiss” between our main characters was LFY pecking HYX on the lips after chasing GQS away from the Duke of Qin’s estate. He used it to claim her as his own, although neither party admitted their feelings until much later.

Which of the characters below has touched Lil Thing? [QUESTION FAILED]

While it’s possible that Su Xiaoyu or Mu Linger might have gotten in contact with Lil Thing while working with HYX, it’s Chu Qingge who’s actually held the creature in her hands (and gotten scratched for it too!) back in Medicine City when Lil Thing went on a gorging spree and nearly got sold off as a pet. Lil Thing has also glared at Su Xiaoyu in the past when she was still a bad girl, buuuut AFAIK they didn’t get physical. Then again, my memory’s fuzzy, so if someone can prove me wrong in these 900+ chapters, send me a quote!

How many patients did Gu Beiyue cure/save during the medical skills competition in Medical City?

The key part in this question is cure/save. Gu Beiyue saved three patients: a pregnant woman, a woman with amnesia, and a girl who looked like an 80-year old grandma. The last one ended up recovering by himself without any treatment, so he doesn’t count!

Which of the following is NOT an ally and/or supporter of LFY and/or HYX? [QUESTION FAILED]

You would need to check sithkazar’s PGC Relationship Chart for this. There are two Noble Consort Xiaos in the story: one from Tianning’s imperial court and the daughter of Xiao Zhengxin, an official in Long Feiye’s faction, and one from Northern Li’s imperial court as LFY’s high level spy. Thus, both Noble Consort Xiao and Xiao Zhengxin are allies. Huang Gengchen is the full name of Imperial Physician Huang, who was a good friend of Gu Beiyue’s grandfather. Thus, the only possible option is Qi Zonglin, who’s none other than the City Lord of Carefree City, the same mercenary group that tried to assassinate Han Yunxi in the past!

Who has the highest resistance to poisons in the list below?

Poison Gu is the only one of the bunch with resistance to high-level poisons, so they win this round!

List in chronological order the poisons that Han Yunxi and company have obtained so far:

Nobody in the story has found Fire of Ten Thousand Poisons yet. The only tangible mention made in the story was when Gu Qishao was in Three-Way Black Market and remembering having a hunch on where to find it.

What are Ning Jing's favorite flowers?

This was detailed when Tang Li decoated their bedchamber with both daisies and roses, then mentioned how he’d promise to plant a whole mountain full of daisies just for her. Plum blossoms refer to Plum Blossom Sea, the Jiangnan estate that LFY gave to HYX, while sunflowers are HYX’s favorite!

In an offhand comment in one chapter, Bai Yanqing told Bai Yuqiao he had news of her long-lost sister.

Which of the following is the name of a real battle technique used by a PGC character?

Double Swords Harmony is the specialty of the City of Daughters’ former city lord, who utilizes the principles of magnetism to fight with two swords in sync. The others are all made up. It's Nirvana Heart Arts, not strike, and Shadow Apparition is stolen from Naruto! Meanwhile, Lustbite Seal is the name of a type of seal, not any techniques!

Again, don’t be confused! Let’s break these down one by one:

Next up, a collection of survey feedback from PGC readers!

Pictures speak louder than words, so I'll have you guys look at charts instead!

Ning Jing takes the next batch at 3.8%, while everyone else is too insignificant to mention. Special shoutouts included Lil Thing and Zhao mama!

Don't you guys think it's a little impressive that Duanmu Yao's hate statistics are almost as high as HYX's popularity? Rounding up the poll are Mu Liuyue (4.9%), Chu Qingge (6%), Bai Yuqiao (3.3%) and Murong Wanru who I forgot because she's been permanently braindead for so long! (I guess Princess Changping should be there too...well, that's what the "Other" option is for, hah!)

The next biggest sliver is Chu Tianyin (2.7%). Looks like a few readers think Cang Qiuzi (LFY's martial uncle who punched him badly!) deserve to be up there too, as well as Ning Cheng. Dundundun!

Hey! Advance chapters for anyone who wants to visit me at my palace! Assuming you find it first, of course. Following up are Bushii Island (8.2%), Tianning Country (7.7%), Mysterious Continent (5.5%), Fishery Island (2.2% and I guess you guys really like your seafood), Northern Li (1.6%).

A lot of choices here, so breaking it down further we get Hundred Poisons Sect and Medical City (5.5%), Celestial Mountain Sword Sect/City of Daughters/Poison Sect (3.9%), Tang Clan (3.3%), Medicine City (1.7%), Carefree City (1.1%), non-Qin royal family (0.6%), and someone who wants to rule over the world as its administrator! Ahem, PGC the System Transmigration Novel, anyone?

You guys are all Gu Beiyue stans, aren't you? Or moneybags wannabes. All that aside, we have following them the Black Clan (6.6%), Mermaid Clan (6.1%), Wind Clan (3.9%) and Li Clan (1.7%). Yeah I don't blame you, those Li fellows don't sound all that exciting in comparison snorts.

If you could meet with one character in PGC for 5 minutes, who would you pick and what would you say/do?

Most people picked the main characters featured in the favorite characters poll, especially LFY, HYX, GQS, and GBY. Besides admiring LFY and HYX, a lot of readers wanted GQS to stop pining for MLE, MLE to start chasing after another guy, NC to calm down and know he's doing a good job, TL and NJ to stop fighting, etc etc. Here are some memorable quotes:

Readers who would probably die if their wishes came true:

Most people cited the story (plot) and romance, either between our main couple or side couples! A good number just said "All!" or "everything!" Here are more notable remarks:

A lot of readers cited the length or the wait for new chapters (ahaha ^-^;;;;), while some said "none/nothing" and high-stress story arcs where the villains took center stage or HYX and LFY had conflicts with their enemies and/or each other. More memorable quotes below:

When Plot Gets Too Much:

Words from the Translator:

Wow, so it's been a good few years since I've started on this novel translation project! Some of you have followed me since the start, while others joined in the fun along the way. Whatever the case, you're all here because of PGC, and I think that's something really special. Just like all your efforts earned these bonus chapters, your love for Han Yunxi and Long Feiye's journey fuels me to translate more as well! Of course we're going to see this novel to the end. That was something I promised myself when I undertook this project. Ahem...sometimes I've been slower or delayed, but after coming this far, I'm not gonna leave you guys hanging!

Through PGC I've gotten a better handle on Chinese (and webnovel cliches, heh) as well as readers like you--your likes and dislikes, your inside-jokes and mini-commentary-societies. It's been quieter since we've moved to the new site, but I hope to hear more of your voices in the future (if not in comments, then in quizzes like these)! This post is already getting insanely long, so I'm going to wrap up here and finish up translating today's chapter.

Until next time, live well and happy reading! 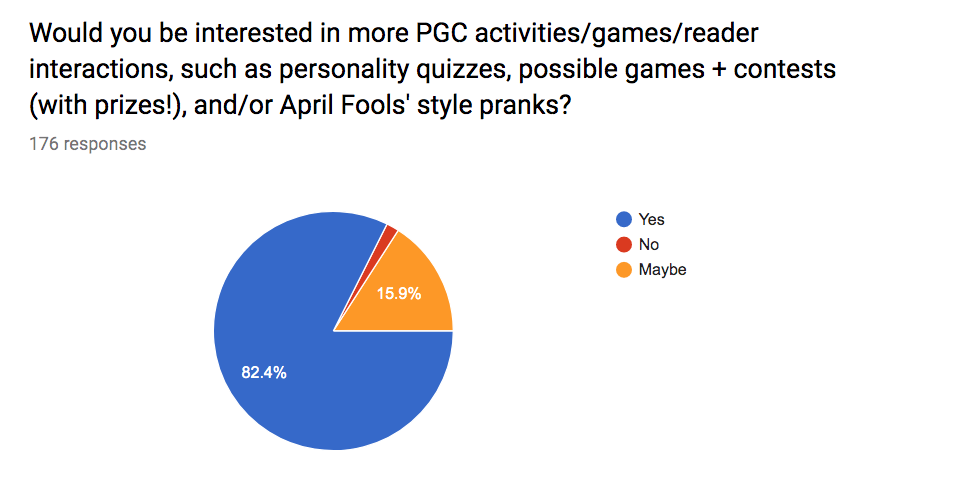 Coming Up Next Time... the PGC Personality Quiz! Stay tuned at a PGC Chapter Announcement Post near you!