It was evening by the time they reached B City. That, coupled with their stopover at the office, meant that it was already eight o’clock when they reached home. By then, both siblings were starving.

The apartment they’d been given was finely decorated, with all the necessary furnishings and kitchen appliances provided. However, the fridge itself was empty. Seeing as their food supply at home was nonexistent, the pair of starving siblings could only go out to fill their empty stomachs.

Having been to B City several times in the past, everything else notwithstanding, they knew exactly where to go to find good food. This was all thanks to Zhao Chengning bringing them all around B City to sample the food it had on offer, giving off the feeling that they were going on a foodie tour in the city.

The siblings were extremely fond of spicy food, so they drove over to a century-old restaurant that they’d previously been to.

The restaurant owner was a slightly plump and beer-bellied uncle in his fifties, that looked a little like a Pokonyan when he laughed; causing Shen Jingbin to take quite a liking to him. [1. ポコニャン！Pokonyan! a 1993–1996 anime series produced by NHK. There are 170 episodes, each 10 minutes long. It is licensed by Enoki Films as Rocky Rackat!. Pokonyan! was very popular in the 1990s, when there was a tanuki trend. Here’s a pic of how Pokonyan looks like: 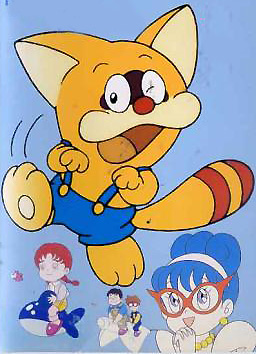 ] Owing to their outstanding appearances, the owner still remembered them even though Zhao Chengning had only brought them over once.

Eight o’clock was still peak hour for dinner. When they arrived, they spotted quite a few customers waiting by the counter to be seated. The owner, who’d been welcoming customers alongside the waitresses, spotted two eye-catching figures out of the corner of his eye and unconsciously looked over.

A smile immediately broke out on his face when he took a good look at them. He tossed the customers that he’d been welcoming over to one of the waitresses and went over to greet them.

The restaurant fell silent for several moments when the siblings entered before the restaurant owner went up to greet them and led them straight into a private dining room.

For more well-known restaurants like these, there’d usually be a private dining room or two that was specially prepared for certain customers. The restaurant owner had a very good impression of the siblings. Feeling like it’d be a waste to have the two of them wait outside and be gawked at by onlookers, but at the same time not having any private rooms left available, the owner acted on his own initiative and boldly brought them in into the private dining room reserved for the Zhao family.

He figured that the two of them must have something to do with the Zhao family. Otherwise, he wouldn’t have seen the Second Young Master of the Zhao family personally bringing them over, and even help with serving the food.

Owing to their ravenous hunger, the siblings ordered seven to eight dishes in one go as soon as they sat down. Following that, the restaurant owner chatted with them for a little while with a smile on his face before leaving.

Shen Jingchen raised his head and surveyed the private room. “Isn’t this the same private room we sat in the previous time we came?”

Shen Jingbin glanced around too and said, “The furnishing in private rooms across all restaurants look pretty much the same; you’re probably overthinking it.”

“Am I? But weren’t there lots of people still waiting outside? Why did we get a seat the moment we arrived? Did you reserve a seat beforehand?”

Shen Jingbin shook her head. “I didn’t, but I think it’s probably because I’m too pretty.”

In the meantime, the restaurant owner was instructing the chefs to prepare the dishes ordered by the siblings. He’d just finished his task when his personal phone rang. He looked to his phone’s screen and, as luck would have it, it turned out to be a call from the Second Young Master of the Zhao family.

“Boss Liu, my Grandfather suddenly felt like eating food from your restaurant, so I’ll have to trouble you today. The private room’s still reserved for us, right? We’ll be coming down in a while. Just the usual for the food will do, and add an additional serving of longan, red dates, and lotus seed soup.”

Boss Liu froze. “Second Young Master, did you just say that you’ll be coming over in a little bit?”

F*ck, what’s with the crappy timing?!

Sensing that something was off, Zhao Chengning asked, “What wrong? Is there a problem?”

Boss Liu thought for a bit before he replied, “It’s like this Second Young Master: I let someone else use your private room just now.”

A tinge of discontent crept into Zhao Chengning’s voice, “Boss Liu, when did you start conducting business in such a manner?”

Offending Zhao Chengning was clearly a foolish move, so Boss Liu quickly explained himself, “It’s not that, Second Young Master, please listen; the siblings you brought over previously arrived at my restaurant. I knew you were busy, and there weren’t any seats left apart from those in the private rooms. It looked like they’d had a hectic day, and seeing as they were your friends and your private room wasn’t being used, I figured I might as well let them occupy it...”

“The siblings I brought over last time are there?”

Zhao Chengning’s hand that was clutching the phone froze. They’d come to B City? Then why hadn’t he heard anything about it?

Not having heard his reply, Boss Liu raised his voice and called out a little apprehensively, “Mr Zhao?”

“It’s fine if it’s them. Have our dishes served regardless; I’m coming down now.”

Zhao Chengning stood from his seat. He grabbed the suit jacket that he’d taken off, picked up his car keys in one hand, and held his phone in the other hand as he said, “It’s fine. Boss Liu, have the dishes served slower, I’ll come down as quickly as I can.” With that, Zhao Chengning hung up and quickly strode out of his office.

Boss Liu shed invisible tears as he listened to the disconnect tone on the phone. He sighed before he retraced his steps back towards the kitchen. Then, powering through the looks of disdain the chefs were sending his way, he instructed them to prepare the siblings’ order last.

Sigh, being a restaurant owner’s so difficult these days!