To prevent their identities from being exposed, players from the Shinra Sect didn’t get transported into Hell when they died. Instead, they had their own respawn point, and their respawn process was a lot simpler than that of disciples from the Six Great Sects.

After being killed by Nine Ballads and resurrecting at the Shinra Sect base, Tiny Little Loli started spewing curses at her in the sect channel.

[Shinra Sect] Tiny Little Loli: Nine Ballads, you shameless woman, is killing off your sect members fun for you? You’re actually an undercover agent from the Six Great Sects, right?

[Shinra Sect] Tiny Little Loli: You hypocritical, scheming bitch, don’t you feel embarrassed with yourself for doing something like this? The Shinra Sect has some seriously bad luck to have scum like you in it.

[Shinra Sect] Boeing 747: Are you guys fighting? Don’t be like that, we don’t have that many people to begin with.

[Shinra Sect] Tiny Little Loli: Nine Ballads, are you a mute? Acting as if you can’t see what’s happening! Speak up if you’ve got what it takes! Heh, I didn’t think that you were such a coward.

Reckless East Emperor tipped Nine Ballads off when he saw Tiny Little Loli continuously cursing her in the sect channel. “Take a look at the guild channel.”

Nine Ballads glanced at the guild channel before she coldly snorted and said, “Ignore her, she’s an idiot.”

Reckless East Emperor felt helpless as he watched Tiny Little Loli’s curses become increasingly more explicit over time. When he couldn’t take it any longer and wanted to speak up for Nine Ballads, she cast a glance at him.

“You don’t need to say anything; just kill her on sight from now on.”

Going back to Shen Jingbin’s group.

The two of them were transported to a space that was completely closed off within the tattered notebook. This space was filled with towering bookshelves of every size that were filled to the brim with stitched bound books[1. A type of bookbinding used in the olden days that Chinese, Koreans, Vietnamese, and Japanese used. Here’s a picture of what it looks like 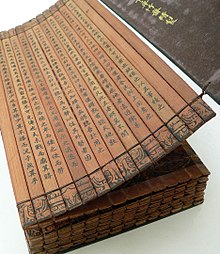 “This is?” Shen Jingbin asked as she looked at Quiet And Steadfast.

Quiet And Steadfast walked towards a bookshelf, pulled out a random book, and starting flipping through it.

“Divine Beast Chronicles,” Quiet And Steadfast concentrated on the three words written in fanciful script for a moment before he managed to discern them.

“Divine Beast Chronicles?” Shen Jingbin jogged over to his side and popped her head over to look. “It’s a book about Divine Beasts?”

Quiet And Steadfast nodded. “Then let’s check it to see if there’s anything about the Black Tortoise,” Shen Jingbin said hurriedly.

Quiet And Steadfast started flipping through the book as she’d said. Shen Jingbin didn't just idle around while she waited either. She walked over to another bookshelf and pulled out a book, but it was yet another <<Divine Beast Chronicles>> book. Could there only be this one book available in the entire room? Just how much chronicling was there in this book?

This room had a total of four sides to it, with each side corresponding to a different Divine Beast. Everything about the Divine Beasts - from the moment they were born to everything that happened after that - was recorded in them. After discovering this clue, Shen Jingbin and Quiet And Steadfast promptly gave up on the other three bookshelves and headed straight for the bookshelf situated in the North that represented the Black Tortoise.

After searching for a while, the two of them finally found out that Black Tortoise’s last appearance was at the Southern River Island in Beiming Sea.

Though they’d managed to figure out roughly where the Black Tortoise was, they were now faced with a new problem.

How were they going to get out of this place?

Shen Jingbin pulled the notebook out of her backpack.

The ‘tattered notebook’ was now identified as a ‘mysterious notebook’. When Quiet And Steadfast reached out to take it from her, a notification sounded in both of their heads at the same time.

“Would you like to be teleported out of this area?”

So this was the key that connected the outside world to the hidden library?

The two of them replied at the same time.

When they opened their eyes once again, they found themselves back in the ruined hut. However, the only difference now was that the hut was empty.

“Are they gone? Or are they…” Shen Jingbin asked.

“Let’s go. They probably knew that pointlessly waiting here wasn’t a good idea since they didn’t know where we went.”

“What a pity, I wanted to see if I could earn some contribution points,” Shen Jingbin said regretfully.

“There’s more than enough opportunities for that in the future. Let’s go take a look at Southern River Island,” Quiet And Steadfast replied.

After that, the two of them hurried towards Sunshine Cleansing Island’s ferry point.

However, a messenger pigeon came flapping over to them just as they exited the forest.

“I’ve found the Lead Disciple of the Maras.”

It was a letter from Pure Crane.

The two of them glanced at one another.

“What now, where should we go first?” Shen Jingbin asked.

Quiet And Steadfast thought for a moment before he said, “Let's look for Pure Crane first; we can head over to the South Wei Islands at any time.”

Forgoing the ferry that was heading towards Southern River Island, the two of them instead boarded the ferry bound for Beiming Sea’s ferry terminal. They then found a teleportation point and jumped over to where Pure Crane was - the depths of Eight Trigrams Field.

“You’re here,” The moment they stepped out of the portal, Pure Crane walked forward to greet them.

Shen Jingbin looked around. When she found that he was the only one present, she asked, “Where’s the Lead Disciple of the Maras?”

Pure Crane pointed behind him. “In the dungeon.”

There was a daily dungeon in the depths of Eight Trigrams Field. It wasn’t very difficult, and it could be cleared in around twenty minutes with a normal party formation.

“How long have they been in there for?” Quiet And Steadfast asked.

“They just went in.”

“How’d you found out about the Lead Disciple of the Maras?”

“That person accidentally revealed the information himself when Delicate Flower’s group went in with him.”

Quiet And Steadfast asked, “Which guild is he in?”