Happy Lunar New Year! The Year of the Rabbit! Do we have any bunnies in the house?   I hope you’re all having a safe and productive 2023! Today, I have interviewed Choco Lily! Choco Lily has been reading on our site for years! I recalled six years ago, she wanted to write a novel about us, and asked if I could be part of her story.

I, of course, said yes! I ended up getting a pervy role, but I quite like it. Hehe. It’s called beauty appreciation! *flips hair*

Here is a snippet:

Before I get started, I'd like to mention that this note is different from those that came before. While the other additions were purely for the purpose of providing background (facultative) information, this note, in my opinion, is vital to the understanding of the story of Sundering Nature. Therefore, I strongly recommend reading through this.

By now it's obvious that Mr. Kong, the mysterious figure in SN, plays an important role in the plot. However, a non-Chinese reader, unlike his/her Chinese counterpart, is naturally disadvantaged by the fact that he/she lacks the cultural knowledge about the character that allows him/her to interpret the plot, to the point that future events might seem to come out of the blue. Therefore, to avoid this predicament, I would like to provide some information about the character, Mr. Kong.

First, as I mentioned it should be obvious to a Chinese reader that Mr. Kong is a representation of Sun Wukong (Wukong, Monkey King, etc.), a fictional character originally featured in the book Journey to the West. Journey to the West itself is a novel published in 16th century China and is one of the Four Great Classical Novels. (That's why knowledge about it is almost equivalent to general knowledge in China. Think about the equivalent of Shakespeare in English)

First of all, images. Sun Wukong is popular outside of the classic tale and represented in many other works. He's usually depicted as the following: (Source: http://www.foreigners-in-china.com/monkey-king.html) Wukong from the TV drama adaption of Journey to the West 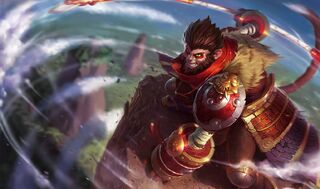 (Source: https://soulreaperblaze.deviantart.com/art/Goku-And-Sun-Wukong-269098758) Comparison of Wukong from Dragonball and the real Wukong.

I'm sure that you've noticed at least a few similarities between the representations, one of them being the fact that Wukong is a monkey, and the other one being that he always carries a golden/metallic staff. These are two signature traits, which is why I said that any Chinese person, when seeing that Mr. Kong pulls out a golden staff that can shrink and grow, will know that it's Wukong, since his name also suggests the same thing.

Allow me to offer a quick recap of the story of Journey to the West, because after reading about the "two" Mr. Kong, it dawned upon me that this in itself might be yet another reference to the original tale. The tale basically goes like this: Wukong jumps out of a rock on a mountain, becomes the monkey king and learns a lot of awesome techniques. The most important moves include the 72 transforms (he can transform into anything), and a flip that carries him about 5400 km away. He then gets his hands on his golden staff and decides to f*** the Heaven's (hmmm, Heaven) police and rebel against the Jade Emperor. He's ultimately punished and crushed beneath a mountain for hundreds of years until he meets a monk who's on his way to India (a.k.a. the West) to get Buddhist scriptures. He aids the monk in his quest and redeems himself by protecting him against beasts and evil humans etc. and ultimately Wukong becomes a Buddha (note, not the Buddha). The End.

One particularly interesting story during Wukong's adventure is when he meets another monkey, the 6-ear Macaque. The macaque is famously known for impersonating the original Sun Wukong and attacking the party/stealing their stuff, and then causing the blame to be laid on the latter. Wukong tries to fight him, but his abilities are closely matched by the Macaque, and they're identical to the point that it took the help of the Gautama Buddha (kind of like the ultimate figure in Buddhism) to distinguish between the two and punish the Macaque accordingly. Therefore, when there are two Mr. Kongs, one good one evil, just like Wukong and the six-ear Macaque in the original work, the author is expecting the readers to be able to make that connection to the original tale as well.

We'll see how the story unfolds, but I am almost 100% sure that the things I've mentioned in the paragraph above will come in handy for you.

For those of you interested, you can find more information at http://www.foreigners-in-china.com/monkey-king.html, https://en.wikipedia.org/wiki/Journey_to_the_West, or just Googling around in general.

If you have any questions, please feel free to ask me and I'll answer/adjust this chapter accordingly!