Hmm, Gary might be a bit cowardly, but he is sure good at fighting.

When Fatty saw that Gary killed the Vampiric Bats all by himself, he walked over with a smile and patted Gary on the head.

With Gary pulling the aggro, the subsequent farming experience improved greatly. Gary would first sneak over to launch an Earth Bullet to lure a Vampiric Bat over slowly. Then, Fatty would leap over in stealth, then… Nothing. That was the end of the bat.

Fatty blew away the traces of blood on his dagger and held a the Bat Fangs he collected. Not all Vampiric Bats would drop the item, so after a bit more than three hours, he only got forty-something fangs.

After countless of meters into the cave, the area around Fatty was pitch black. Then, a ringing sounded out.

Fatty immediately concentrated. Most of the players mining weren't of high levels, so they normally stayed near the entrance. Therefore, it clearly meant that whoever was mining inside the cave wasn’t a player.

Fatty put Gary away, then stealthed over. He saw a large turn on the meandering path, and when he turned around the corner, a large clearing came into his eyes.

The cavern itself had clearly been abandoned for a long time. There were all sorts of mining equipment scattered on the floor alongside several rusted mining trolleys. There were also a few lit torches in the corner of the cavern. The flames occasionally went out under the cold breeze, making the area all the more sinister. The ringing sound itself came from a place near the torches.

The area had already become a Vampiric Bat paradise. Countless monsters circled around in the area, causing goosebumps to rise on Fatty’s arm. Fortunately, the Vampiric Bats weren’t very high leveled, so they were unable to see through Fatty’s stealth.

Fatty carefully walked around the few abandoned trolleys, then saw a skeleton slowly knock at the rocks at its pickaxe.

“Who is it?” the skeleton seemed to notice Fatty’s presence the moment the latter arrived. He put down his pickaxe and slowly turned his skull over. Two balls of ghastly blue flames were burning in its sockets as it looked over at where Fatty was stealthed.

Fatty trembled. But didn’t dare to reveal himself. There were too many bats around, and once he showed himself, they will definitely suck him dry.

“Young traveler, don’t worry, they don’t dare to come down,” the skeleton said as if it understood Fatty’s worry.

Fatty looked up and saw that although there were a lot of Vampiric Bats flying around, none of them even flew above the head of the skeleton.

Fatty got out of stealth and appeared in front of the skeleton.

“Sir, this traveler from Black Tortoise City offer you his sincerest greetings. Is there anything I can help you with?” Fatty knew that being polite was never wrong.

The old skeleton’s snow-white jaw moved, and seemed to reveal a smile.

“Young traveler, I need your help,” the skeleton put down his pickaxe. “Allow me to introduce myself. I am the overseer of the miners. Look around, do you think that there are too many bats here?”

He paused for a moment, then continued before Fatty could reply, “Countless years ago, this place wasn’t called the Bat Cave. Instead, it was one of the largest mines near Black Tortoise City. However, a night of drastic change occurred. For some reason, most of the torches around the mine went out. Then, a swarm of Vampiric Bats flew in. All of the miners were sucked dry, and even the soldiers standing guard weren’t able to escape.”

“These vampiric bats are evil, crafty and specialize in surprise attacks. They are even more savage in the darkness. After the bats took over the mine, they pretty much put out every single torch in the mine except these ones beside me. Tortoisetown once sent their troops over to reclaim the mine, but could only retreat in defeat when attacked by countless bats. In the end, since the Black Tortoise City’s city lord felt like it would take too many losses to reclaim the mine, and was not worth it compared to the ores here, they chose to give up on it, leaving the mine in the talons of these vampiric bats.”

“Young traveler, do not underestimate this mine. Countless ores were mined out here, and this mine was responsible for the materials of most of Black Tortoise City’s military armors before. Although the lack of this mine will not affect Black Tortoise City normally too much, once a war breaks out and there is a lack of armor, then the army will take insufferable losses. Young traveler, will you accept the request of a dead?”

System Notification: Would you like to accept the mission “Reclaiming the Mine”?

System Notification. You have accepted the mission “Reclaiming the Mine”.

Mission Summary: Light all the torches in the mine and find out the reason behind the appearance of the vampiric bats. Lead the Black Tortoise City’s army into the cave to eliminate the bats and reclaim the mine.

“Thank you, young traveler,” the old skeleton’s spiritual fires trembled in excitement. It grabbed hold of Fatty’s hand with its two ghastly white hands. “The Vampiric Bats appeared from the innermost of the mine. There should be a clue about why they have appeared there. However, there are even more Vampiric Bats in the depths, so be careful. Also, there will be some zombies along the way, they were all risen from the corpses of the deceased miners. If you meet them, then please put them to rest. This is a small personal request of mine.”

System Notification: You have received the side mission “Eliminate the Zombie Miners”.

Mission Summary: There are many miners who died an untimely death in the mine. Their grudgeful feelings filled their bodies, and caused them to form zombies, who cannot ever face daylight. Eliminate at least 1000 zombie and bring their miner badges to the overseer.

After giving out the side mission, the old skeleton picked up its pickaxe and begun to hack away at the stones again. Fatty tried to ask some questions, but the skeleton ignored him. I guess he’s just a mission NPC, so his AI isn’t the brightest.

However, before that, Fatty still observed the bats carefully for a while. He noticed that no matter where the bats flew, they will not fly to an area illuminated by a torch. If that’s the case…

Fatty quickly returned to Black Tortoise City and spent 10 gold coins to buy a fishing net from a merchant. Damn, what a rip off.

When Fatty arrived into the Bat Cave once more, he went deep into the cave and hid behind one of the nearly broken trolleys, then ordered Gary to lure a bat over.

Gary shrunk its neck, then first borrowed into the ground then moved towards where the Vampiric Bats gathered. It shot an Earth Bullet out the swarm, then quickly ran back and hid into the hole.

“So disappointing!” Fatty cursed as a Vampiric Bat chased after Gary. The moment it swooped low, Fatty stood up and threw the net out over the bat and dragged it to the ground.

The Vampiric Bat struggled inside the net, but Fatty only tightened the net and wrapped the bat within.

Die! Fatty stabbed down with his dagger a few times, killing the Vampiric Bat before it could even fight back.

“Go, continue,” Fatty spread out the fishing net once more and ordered.

This time, Gary didn’t hide as quickly. It let out a series of more than a dozen Earth Bullets and lured seven bats over.

“Get down here!” Fatty casted the fishing net out, catching five of the bats. Meanwhile, the remaining two were shone on by the torches’ light when they swooped down. They let out terrible screams as black smoke begun to rise from their bodies, then flew away.

“Good job!” Fatty pulled the net and dragged the five bats down. The bats tried their best to flap their wings and remain in the air, but as the fishing net bound their wings, they couldn’t help but be dragged down.

“Hehe,” Fatty let out a despicable laugh, then leaped over.

Assassin was the second class enhancement for a rogue. They were killers who hid in the shadows. The class had low health, a fast speed and powerful attack. They focused on insta-killing their enemies more than anything, and were the permanent nightmares of smaller factions.

After gritting his teeth and paying the class enhancement fee and the cost to learn the skills, he gritted his teeth, then finally stopped himself from trashing the Class Enhancement Hall.

Stealth for 10 seconds during combat.

Increase movement speed by 10% for 10 seconds

Set up a trap to kill or trap your foe.

There were five skills to learn in total and each one costed 20 gold coins, double the fee for Level 10 skills. Fatty had wanted to ask the mentor for a discount, but the pretty mentor made Fatty completely speechless.

“How could you play a game when you don’t even have the money to learn a skill when you’re already Level 20?”

Thus, Fatty could only hand over 80 gold coin furiously and learn the four skills aside from Trap under the gazes of disdain of the people in the surroundings, then run off to the bank to sort out his equipment. 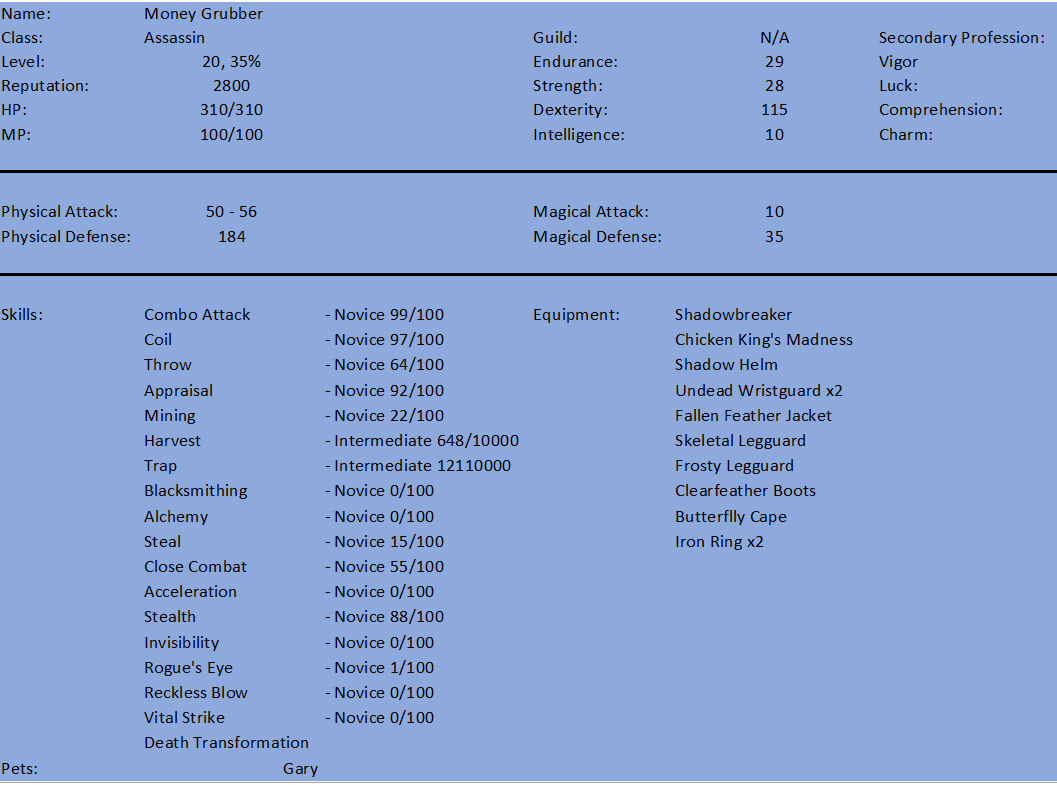