Ever since that woman’s sudden appearance, Lan Jinyao had been on tenterhooks. In the evening, not long after they’d arrived home, Fu Bainian took out a business card from his pocket and handed it to Lan Jinyao.

“That woman slipped this into my pocket earlier.”

Lan Jinyao took the business card and then checked the name on the card. Upon seeing the familiar name, she instantly frowned.

“Qingqing, Qingqing…” she subconsciously murmured this name as realisation slowly crossed her features, and with it, the ominous foreboding in her heart gradually intensified.

Following this, Fu Bainian abruptly asked, “It’s the name of the person you asked me about last time, right? How is she related to Jiang Cheng?”

That was right… That day, when Jiang Cheng was arrested, the person who’d called him was someone called Qingqing. Then, how was she related to Jiang Cheng?

Then, a thought suddenly crossed Lan Jinyao’s mind, and she abruptly exclaimed, “Oh, I got it!”

In the next second, Fu Bainian also cast a glance at her with a perplexed look on his face. “Me too!”

The two of them suddenly stated at the same time.

Lan Jinyao smiled and patted Fu Bainian on the shoulder as she said, “Looks like our tacit understanding is still there!”

Qingqing’s resemblance to Chen Meimei was truly shocking. It was so similar that she and Fu Bainian had subconsciously thought that that woman was Chen Meimei. In fact, it didn’t strike her as strange that Jiang Cheng would create this kind of reverie. At that time, Jiang Cheng had clearly known that she was Lan Jinyao and that she’d reincarnated. Based on how obsessed Jiang Cheng was with Chen Meimei, how could he possibly give up on her and choose to raise her in captivity instead? This didn’t make sense no matter how she thought about it!

Moreover, she had been pondering this question for a long time already: How did Jiang Cheng know from the beginning that she’d reincarnated? If it were someone else, and they hadn’t heard the word ‘rebirth’ in person, she reckoned that they wouldn’t dare to make such an inconceivable inference so easily!

Yet, Jiang Cheng had made such an inference, and he’d also firmly believed in it without any doubts. Back then, there was one person who knew about her secret at Jiang Cheng’s side, and that person was…Shen Wei’an. Why would Jiang Cheng sign a notorious woman like Shen Wei’an out of the blue? Unless…he’d learned of some kind of secret from her! As for that secret, what else could it be?

After a while, Lan Jinyao suddenly asked, “Fu Bainian! Do you think that Qingqing, who chased after you, could possibly be Shen Wei’an?”

Shen Wei’an’s death was genuinely questionable. Not to mention, such a long time had passed already, yet the police hadn’t managed to solve the case. There were many doubtful points concerning this matter, so it was difficult for others to not harbour any suspicions.

“I’m not sure about that yet. In the coming days, you’ve got to be a bit more careful. Look, according to the self-introduction written on the business card, this Qingqing is a famous producer from abroad. Based on her personality alone, do you think that she’d be able to establish a name for herself overseas? This business card must be forged.”

Since this was a forged business card, then, of course, there were many job titles to choose from. She was an actress, and Fu Bainian was the President of Blue Hall Entertainment… It seemed that this Qingqing had indeed come prepared!

If this Qingqing were to make a move on the Chen family, what should she do then?

The next morning, Li Qi and Xiaolin came over, bringing with them the outfit for the Award Ceremony. Lan Jinyao looked exceptionally stunning in the dress, which was adorned with all kinds of gorgeous ornaments, and to her surprise, even a ring had been prepared this time.

Lan Jinyao was somewhat dumbfounded and cast an inquiring glance at Li Qi. “Why did you prepare a ring for me? It’s not like I’m attending a wedding ceremony.”

Li Qi hadn’t spoken yet when Xiaolin hurriedly explained, “Sis Meimei, you know that there are a lot of rumours and speculations going around about your divorce, right? You can take this opportunity to wipe your slate clean. If you make an appearance wearing a ring at the Award Ceremony, then those rumours will surely be discredited!”

Lan Jinyao actually wanted to say, ‘That’s not a rumour, she and Fu Bainian had indeed divorced and hadn’t remarried yet!’ But, in the end, she decided not to.

Li Qi seemed to have guessed her thoughts and hurriedly said, “Meimei, just wear it. Whether you want to continue your career later on in the film and television industry or not, it’s best to take care of the rumours now. Besides, those people are aware of what happened between you and Jiang Cheng, and now that he’s imprisoned, your reputation has gone down the drain.”

Lan Jinyao hesitated for a moment before responding, “Hmmm, alright! Say, did you accept money from the sponsors? Even if I’m to wear a diamond ring to clean up the rumours, I should be wearing my wedding ring and not a sponsor’s. If Fu Bainian sees this, he might grant you two a painful death.”

Upon hearing this, Xiaolin instantly flinched. “I didn’t accept much…”

“Still, that means that you’ve accepted their money!”

Li Qi then quickly said, “Meimei, you shouldn’t bother with this anymore. If President Fu truly gets angry later, I’ll bear the punishment. But, I can guarantee that President Fu won’t get angry with you.”

At this moment, Lan Jinyao shook her head and rebuked, “Look, you two must’ve made quite a lot of money this time. Sigh…even though I’ve grown into a tree that sheds golden leaves, I can’t reap any benefits!”

“Meimei, could you kindly sympathise with me, this poor soul? From now on, I’ll have to start earning more money in order to buy milk powder.”

As soon as his words fell, Lan Jinyao and Xiaolin asked in unison, “Xiaoyun is pregnant?” What efficiency! But, wasn’t He Xiaoyun going to hold her first concert soon? Would she really be okay, jumping around while performing on stage?

Li Qi quickly shook his head and said, “No, not yet. I’m just planning ahead!”

Afterwards, Li Qi took out the ring and handed it to Lan Jinyao. “Meimei, quickly try it on and see if it fits.”

Lan Jinyao helplessly shook her head and proceeded to wear the ring. Right at that moment, a piece of news that was being broadcast on the TV instantly attracted the attention of the three people present.

“Jiang Cheng, the President of River Group Corporation, and the only heir to the Jiang family was released from prison a few days ago. When he went out to sea, he was attacked and killed by unknown forces. His body has already been salvaged, and our reporter is currently investigating the situation to find out more…”

Jiang Baitao bailed his grandson out and was about to send him abroad. But, Jiang Cheng was attacked and killed by someone instead…did Fu Bainian do this?

Fu Bainian had told her that he would take care of this matter, and he’d asked her to believe in him. Lan Jinyao had initially thought that Fu Bainian was worried about offending Jiang Baitao, but she hadn’t expected him to handle the matter like this.

With Jiang Cheng’s death, they had utterly offended Jiang Baitao this time. At this thought, Lan Jinyao suddenly started to worry about Fu Bainian. Jiang Baitao’s means were ruthless and cruel. If he really wanted revenge, then she was afraid that they wouldn’t be able to cope.

“Meimei, what’s wrong?” asked Li Qi with a worried look on his face.

An eye for an eye and a tooth for a tooth! This was a well-deserved ending for Jiang Cheng.

Lan Jinyao cast a severe glance at Li Qi and interrupted, “Mind your words! The police will investigate the truth themselves.” 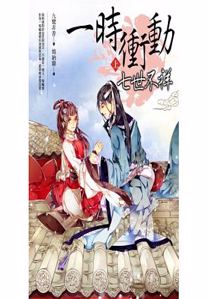