The man’s heartrending voice resounded in Lan Jinyao’s ears, and she could feel that he was near, but she was unable to get in touch with him.

She was having a very long dream. In her dream, Fu Bainian was getting farther and farther away from her.

Lan Jinyao, who was fast asleep, abruptly opened her eyes.

“So, it was just a dream!” she murmured.

However, soon Lan Jinyao realised that all that had happened wasn’t a dream. She was really pushed into the water by that waiter, and then, a pair of hands had tightly tugged at her, continuously pulling her deeper underwater. In the end, everything turned blank in front of her as she lost consciousness.

Lan Jinyao lay in bed and looked around at the furnishings. This place looked like a magnificent cage. It felt extremely foreign; foreign to the point of terrifying her.

She subconsciously tried to get out of bed, but as soon as she did, she noticed that she couldn’t because her hands and feet were tied up; even her mouth was sealed with duct tape.

She tried her best to make a sound, but a minute later, she realised that it was futile. She didn't know where she was. If she rashly made a sound, then the man who’d kidnapped her would know that she was awake.

Back then, not long after she’d taken over Chen Meimei’s body, she’d been kidnapped by a crazy fan. At that time, Fu Bainian was the one who’d saved her. This time, however, she wasn’t sure if Fu Bainian could rush here on time to save her.

He’d come for sure! She had faith in him.

After a while, Lan Jinyao heard faint footsteps coming from the door; someone must’ve come to check on her. She subconsciously closed her eyes in an instant and pretended to be asleep. She tried to breathe evenly. In fact, this was an easy task for her because she’d played this kind of role in her previous life. Her act was so realistic that no one could discern that she was just pretending to be asleep.

The person who entered was a tall man. Although Lan Jinyao had her eyes closed, she could sense that his height was about the same as that of Fu Bainian.

The man was checking to see whether she‘d awakened or not. Lan Jinyao’s breathing was very light at this moment. She’d previously observed people’s sleeping behaviour and saw that the sound of their breathing was actually very light, except for those who snore.

Soon after, the shadow hovering above her disappeared, but she knew that he was still there because she didn’t hear him leave the room yet.

Lan Jinyao just lay there and didn’t dare to move. She wasn’t sure what he was doing at this moment.

Then, her stomach suddenly grumbled; even she herself was startled.

“Haha, you’re pretending to be asleep!” The man tore the duct tape off her mouth.

When she heard the familiar voice, she was so shocked that she broke out in a cold sweat. This incomparably familiar voice belonged to Jiang Cheng. She subconsciously opened her eyes and looked in his direction. This didn’t matter as she practically nearly fainted again when she saw the person in front of her.

The person standing in front of her looked like Jiang Cheng, but was seemingly also not him. That man wore an unsightly mask that made Lan Jinyao shudder in fear.

In the previous kidnapping incident, that madman had worn the same mask. However, in the end, he was killed in the fire, while Fu Bainian rescued her.

This must be a coincidence. That other man had clearly died, so how could he still be alive? Besides, she’d seen his face, and his looks were ordinary. That person wasn’t Jiang Cheng.

“What are you thinking about? You look anxious!” Jiang Cheng sat down by the bedside, his pitch-black eyes staring at her through his mask as he continued, “No, you’re not anxious, you’re scared, aren’t you? What are you afraid of? Of me or...this mask?”

“Jiang Cheng!” Lan Jinyao couldn’t help but scream. “What on earth do you want?!”

Seeing her reaction, Jiang Cheng burst into laughter and removed his mask. For a moment, Lan Jinyao actually thought that she would see a burnt face, but no, Jiang Cheng’s face didn’t change at all; it was the same face she was used to.

She secretly breathed a sigh of relief.

Jiang Cheng observed her expression carefully and became even more delighted. He pretended to be enlightened and said, “I see, you were afraid that the face behind this mask was ruined, right? You know who I am, isn’t that so?”

A dreadful feeling suddenly spread from her heart to her limbs. At this moment, her

“You’re the man from that previous kidnapping incident, aren’t you? You’re, in fact, not Jiang Cheng, and also not the heir to the Jiang family, am I right?”

How could she be wrong? He clearly knew everything; who else knew about that incident so well besides her and the man who’d kidnapped her?

“You’re lying. You’re definitely that person,” Lan Jinyao firmly said; she was confident that they were the same person.

The smile on Jiang Cheng’s face instantly grew larger as he explained, “Your first sentence is correct; I am indeed the one who kidnapped you. But, the latter part you said was wrong. I’m the only heir to the Jiang family, and my name is Jiang Cheng.”

No, this didn’t make any sense!

Lan Jinyao shook her head and questioned, “If you were really that person, then you’re already a…”

“A dead man, right? But, I’m still alive and well.” Jiang Cheng suddenly interrupted and finished her words for her.

“What’s with this situation?” If this man was really the one who’d kidnapped her, then who was the man on the deathbed?

“There’s still a lot of time for us to catch up, so I’ll explain things to you tomorrow. Let me prepare a delicious meal for you first, aren’t you hungry?”

His fingertips fell on her cheek and caressed it gently. “Does Fu Bainian cook for you? I don’t think so. Look, you’ve lost so much weight. The last time you stayed with you, you were still a fatty.”

Before Jiang Cheng walked out, he turned to her and said, “Don’t try to escape, because you won’t be able to run away anyway.”

Upon hearing this, Jinyao was so angry that she started shouting at him. “You clearly know that I’m not Chen Meimei! I’m not the Chen Meimei that you love!”

“No, you are the one I love!” Jiang Cheng turned around, stared at her with a gloomy expression, and added, “I like the current you more, so, you better behave and stay here with me!”

Lan Jinyao wanted to cry, but there were no tears.

Fu Bainian, quickly come and save me!

Yuna's Note: Oh my... this chap gave me goosebumps! O_O Did you guys and girls foresee this? 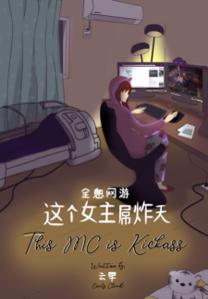 This MC is Kickass
Advertisement