Dear Grace, what should I do if I fell for the wrong person? 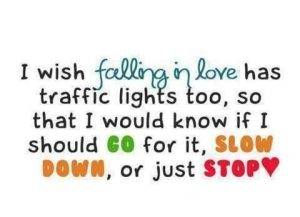 What should I do if I fell for someone who is not right for me?

(Note: I asked E why she thought the guy wasn’t right for her. She mentioned that they had completely different life experiences, values, and goals.)

In my opinion, the first thing you must do is to figure out whether he also feels the same about you. Does he like you too? Or is it only a one-sided thing?

If there aren’t mutual feelings between the two of you, I don’t see a point of trying to do anything. Move on and find someone else.

However, if he does like you as well, there are a few questions you need to truthfully answer yourself:

This includes his values, decisions, behaviour, occupation, environment, people who he is associated with, family members, and so on.

You’re not going to be able to have everything your way. But how far are you willing to adapt or accommodate to him?

Even if your approaches are different, you must both be roughly on the same page. I would suggest making a list of goals or things that you want within the next 2-3 years and compare it with his list. If you’re both aiming for something completely different, it’s probably better to let each other go.

I know my answer is more on the rational side, but I don’t believe in simply following your heart. I would weigh the pros and cons before making a decision.

If you two really want to be together, sacrifices must be made. Whether you think it’s worth it or not really comes down to how much you value the other person. I wish you all the best!

I’m also the translator of Your Highness, I know my wrongs, Supernatural Girlfriend, and The Eunuch is Pregnant!

If you’re into romance comedy, they are all for you!! The first two that I’ve mentioned are already under the completed section on volare. If you’re into sexual stuff, you can get some satisfaction from The Eunuch is Pregnant! (NOTE: There is a lot of nudity and racy scenes!!! Reader discretion is advised. *wink*)

Feel free to add your thoughts in the comments below!