7 signs he/she is NOT into you 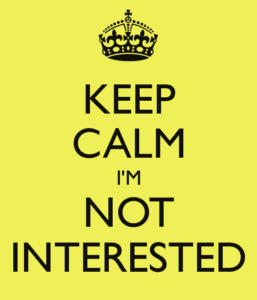 7 signs he/she is NOT into you (Note: This post is assuming you’ve demonstrated some sort of interest and you’re wondering or confused about what the other person may be thinking)

If the person you’re talking to never wants to meet you one on one, it’s a sign that he/she is not interested. So if he/she keeps refusing to meet after you’ve asked multiple times, it’s pretty obvious that you should move on.

If you’re always the person who has to initiate the conversation, most likely, it’s because they’re not interested.

Everyone has 24 hours. Even if we are busy, we will make time for what’s important to us. If they never have time for you, it means you’re not a priority to them. If they really want to see you, they will make time.

If you’re constantly receiving one word replies, it means they do not want to continue the conversation. They want it to end. If they wanted the conversation to go somewhere, they would ask questions or put in more effort.

If someone is interested in you, he/she would not tell you about another love interest. That would jeopardize their chances of being with you.

If a person is trying to avoid touching you at all cost, that is a pretty clear sign he/she is not interested.

So, if the person’s actions has been causing you to question whether he/she actually likes you (Ex. not contacting you for days, not making any effort, and so on), he/she is probably not that into you. (Note: If the person thinks he/she has no chance with you, he/she will probably not do anything).

What are your thoughts? Did I miss anything else? Let me know in the comments below!