Truth be told, Bai Xiangxiu had only fainted for a moment. By the time she’d woken up, that man was already leaning on top of her and staring intently. Even with her eyes tightly shut, she could still smell the dense smell of a man. Her heart almost stopped beating. She was so scared that she didn’t dare move. It wasn’t clear what the male lead was trying to pull. This was completely different from the plot!

In the story, the male lead hadn’t become involved with any of his concubines before he’d met the female lead. So why was she suddenly beneath him?! Thankfully, the weight on her soon vanished as the man strode out. She let go of the breath she was holding, taking another in relief. Aiya! He scared me to death. Is the male lead high or something?

She wiped sweat of her forehead. As expected, the scariest one here was the male lead. She redoubled her determination to pursue the supporting male lead. However, she’d overworked herself recently and her blood sugar levels were a little low. Was that why she’d suddenly fainted several times? While she sat there contemplating, Xiaoshi arrived with the physician in tow.

Xiaoshi instinctively let out a sigh of relief when she noticed that the prince had already left, then immediately berated herself for that. She should’ve been disappointed that the prince was no longer here. Her mistress was the prince’s concubine, so it was a great blessing if he bestowed favor on her. However, she couldn’t help but feel distressed as she looked at her delicate mistress. The prince was such a towering, powerful military man. What if mistress isn’t able to take… Xiaoshi’s face flushed as her thoughts began to wander.

Bai Xiangxiu started to take today’s medicine and didn’t even glimpse the shadow of the male lead in the coming days. She had the feeling that he’d come only because the old madame had pressured him to. But why hadn’t he gone to any of the other courtyards? Perhaps, he’d come because she’d been too frightened?

One should never try to guess the male lead’s mind. No matter how much one guessed, the correct answer would never reveal itself. Since he was her harbinger of doom, it was better not to be too familiar with him anyway. As for her, her poem hadn’t seemed to seduce Song Jiaoyue. So it turns out that fame was still the most important? She sighed and continued to brainstorm other seduction methods.

That’s right! The old madame’s birthday is coming up. The supporting male character will definitely be there, but the female lead won’t because she’s ill. That’s why she’ll deliver a painting, which will attract the attention of the male lead and the supporting male. I can’t let Song Jiaoyue notice the female lead! I need to scramble for a bit of the limelight. At least, I can’t be outdone by the female lead. Otherwise, it will be very difficult to recapture his heart later on.

When Bai Xiangxiu recovered, she poured all her energy into thinking about the best present to give the old madame. A painting was obviously out of the question. She was only an expert when it came to gardening. She thought about it carefully for a very long time before asking Xiaoshi, “Where can tree roots be found in the compound?”

“Ah? Tree roots? Madame Xiu, what do you want with those?” Xiaoshi had the feeling her mistress was becoming weirder and weirder recently. The illness caused by her fright was apparently not healed yet.

Xiaoshi, confused as she was, was nothing if not dutiful. “I’m think only the kitchen would have some.” The kitchen chopped up tree roots to fuel their cooking fires.

“Let’s go take a look and see.” Bai Xiangxiu set down her cup and decided to take a walk. Ever since she’d transmigrated, she’d remained hidden inside her small courtyard and rarely gone out. Of course, she immediately attracted attention whenever she left, not only because of her appearance, but also because of the way she dressed herself.

Bai Xiangxiu was a modern person, thus there was some different elements added to her attire, such as her makeup style and accessories. The fusion of ancient and modernity was both clever and very becoming. However, she often forgot her stunning appearance. A smile lit up her face as she hummed happy ditties all the way to the kitchen. The kitchen servants all froze and gawked at her. How could the beautiful and charming Madame Xiu come to such a dirty place?

Xiaoshi saw her mistress about to forget herself and do things in her usual carefree manner. She hurriedly blocked her mistress from rushing in. “Madame Xiu, someone might barge into you if you walk in like this. Why don’t you rest inside the pavilion? Your humble servant will call someone over to handle the matter.”

How troublesome! Nevertheless, Bai Xiangxiu was forced to sit inside the pavilion. A granny servant soon arrived and spoke with a careful smile. “Madame Xiu, what instructions do you have for us in coming to this dirty place?”

There weren’t that many mistresses in the rear court of the prince’s complex, and all of them just recently moved in. Therefore, the servants were all extremely careful because they had yet to understand their mistress’ tempers.

Bai Xiangxiu replied with a winning smile when she noted the granny servant’s good attitude. “It’s like this… I’m searching for some tree roots. The stranger the appearance, the better. Can you arrange something like that for me?”

The granny servant was lost for words, but soon recovered. “Certainly, but the firewood room is dirty and messy. Would it be better if I let someone bring a few for you to choose?”

“You wouldn’t know what kind of tree root I want. It’s better if I go myself. Just have someone to lead the way.” Bai Xiangxiu was quite polite and very beautiful when she smiled. The granny servant had a very good impression of her.

Although the request was a bit strange, the servant had no issues with it. “Then, please just follow me. I’ll lead the way. This way please, Madame Xiu.”

Bai Xiangxiu finally found what she was looking for after rummaging around in the room for a while. She told the servants carry it back to the Winter Courtyard. Brimming with satisfaction, she instructed the kitchen to cook some of her favorite dishes before returning. The servants were all baffled. A pampered, beautiful and charming madame wanted to eat common food? What on earth? In the end however, they were servants and simply stifled their questions. They let it go and sent over dishes as per her requests.

“In response to Your Highness, Madame Xiu personally ordered us to carry this over to the Winter Garden. We have no knowledge about its use.” The servants replied down on one knee and with heads bowed.

Long Heng was baffled. She was a frail lady who’d fainted when putting even one foot outside her house. What did she want to do with this kind of cumbersome thing? Although he found the idea strange, he didn’t stop them. He took off after throwing out, “Then, on your way!” He wanted to find a gift for his mother’s birthday today, and was currently fretting over what to gift her. That tree stump had vaguely resembled a table, which brought to mind his mother’s love for tea. It wouldn’t be a bad idea idea to gift her a set of tea utensils.

The area in the Winter Courtyard that had previously been filled with paper and ink was now filled with wood shavings after the wood stump was brought back. Xiaoshi witnessed her mistress grab a bunch of carpentry tools and start to shave, level, cut, drill the stump. She was worried! She feared that her mistress would be injured by those heavy tools. Fortunately, her mistress seemed to be used to this kind of work and remained surprisingly unharmed.

Bai Xianxiu kept talking to herself while working. “Ah! This, this is called wood carving.”

“Madame Xiu, who are you talking to?” Xiaoshi asked suspiciously.

“No one. I’m talking to myself.” The truth was, she was conversing with Huo’er, the cactus. He seemed to have ten thousand questions and kept asking questions about everything all day long. She normally didn’t like to respond since she was afraid one-sided conversation might give off the impression that she was crazy. However, if she was alone, she would sometimes reply with a word or two. She hadn’t noticed Xiaoshi coming in with tea earlier and so had been overheard.

“Both of you will know when I’m done.” Bai Xiangxiu smiled.

“Oh!” Xiaoshi nodded. Wait, what does she mean by “both of you”? Who was the other person? Could it be the prince? It seemed like her mistress still had the prince on her mind. She couldn’t help but feel a burst of distress for her mistress.

“How many more days is it until Old Madame’s birthday?” She had prepared this for such a long time, it really was a big deal!

“Good, there’s still enough time.” Although wood carvings needed a very long time to be completed, she’d expressly chosen a piece of wood that already held most of the finished shape. It wouldn’t take too much time to just spruce it up to a finished product. It would be done after she put some lacquer on it, something she could easily do herself.

DCF is now available on amazon! Please purchase the ebook to support us. We have to remove the rest of the chapters because the novel is available for free on Kindle Unlimited.

Anyhow, here's the link to book 1! Please leave a review for us if you like DCF. It will help us out greatly! 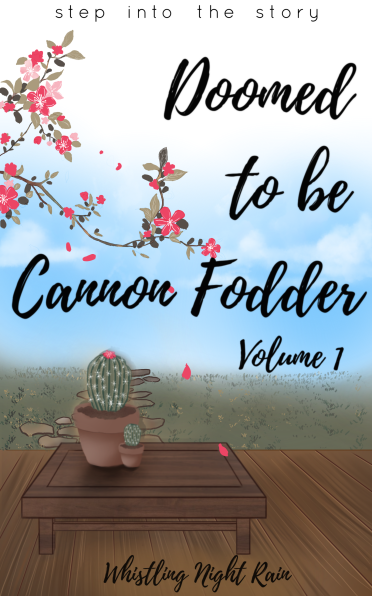