“Why it is like that?” Gao Bingze was aghast. His hands were shaking to the point he couldn’t even hold the list, letting it drop to the floor. He was stunned for a moment, then he hurriedly prostrated. “Your Ladyship, this small official had looked through the list before delivering it to the inner court. At that time, the list didn’t have any errors - Miss Ji’s name was absolutely on the list.”

That was to say, there was a problem within the inner court, but the Head Manager couldn’t afford the blame.

“Vice-Director Gao, are you implying that the list has been truncated by the servants in the inner court?”

“There weren’t any errors before the delivery.”

“The list was delivered by Vice-Director Gao which is an undeniable fact.”

Both of them quarrelled without anyone giving an inch to the other.

Concubine Xiao slammed her armrest. She got up with Sang Lan’s support and walked to them. After a moment of silence, she said to Minister Liang, “Lord Liang, the candidates who are going to enter the palace were selected through your Han Academy’s approval. Miss Ji’s name should have been on the list. Can you tell me what is going in the end? Give me a good explanation!”

How ruthless! He actually put all the blame on Vice-director Gao.

Vice-director Gao looked at his superior with wide eyes, stupefied. His forehead was covered in sweat. “Lord Liang, you know I will not do such thing. I didn’t commit any trickery.”

“Then, can you explain to me why the original list wasn’t handed to Head Manager? How did such an incident occur?”

“I don’t know!” Gao Bingze was completely at loss. He paled from fright.

Concubine Xiao calmly looked at Ji Li. “Secretary Ji, this incident occurred because of the negligence of the Han Academy and the inner court. Regardless of whose fault, this Imperial One will punish them. Please understand the Emperor’s birthday is just around the corner. We can’t let any scandal reach his ears. I will order the inner court to produce a letter and personally deliver it to the General’s Mansion.”

She paused, raised her hand and pulled out a top-quality red-colored jade hairpin. “This jade hairpin was bestowed to me by the Emperor. At this moment, this Imperial One will gift it to Miss Ji as an apology.” She gave it Sang Lan and ordered her, “Wrap it and send it along the letter to the General Mansion.”

“Yes, your ladyship!” Sang Lan received it with both hands before putting it in an ornamented box.”

“Since the matter has been cleared, let me handle everything according to your ladyship. This official offers my greatest thanks for the gift in my sister’s stead,” Ji Li declared.

Concubine Xiao chuckled. “I heard Miss Ji’s beauty is akin to a celestial maiden - gentle, cultured and refined, with a mastery of the four arts. This Imperial One is truly eager to meet such a talented woman.”

“Your Ladyship had exaggerated.”

“Enough. Secretary Ji, you better hurry home and tell her the news as to not let her brood over it further.”

“Yes, your Ladyship. This official will retire first.” Ji Li saluted her before departing.

Rewards should be given when deserved, and same goes for punishments.

She stared at the kneeling men before her. Her eyes were filled with ferociousness and slyness. She waved her hand and announced their fate. “Regardless whose fault it was - the inner court or Han Academy, everyone will be punished. Everyone in the inner court will receive 20 boards, and everyone in Han Academy will had no salary for half a year and no mention of a raise is allowed!”

Not getting their heads cut was a good enough result!

The three men bowed. “Thank you, your Ladyship!”

In a short time, the inner court was able to make another letter of acceptance and the Head Manager of the inner court hurriedly delivered it with the hairpin Concubine bestowed to Miss Ji.

Ji Muqing was in heaven. She held the letter in one hand and a mirror in her other hand, admiring the hairpin in her hair. After inserting it at different places, she was finally satisfied with the result. Next, she smeared some rouge on her lips and cheeks. She admired her reflection and practiced her smile in front of it.

Once again, she touched her newly acquired hairpin. Then, she turned around, arrogant as usual, and questioned the maidservant beside her. “Do I look good?”

Yeah, the hairpin is pretty, but the person…

The maidservant nodded. “It’s very good. You look very good with that hairpin on.”

Where is the basin? Her appearance made me want to vomit!

“This has been bestowed by her Ladyship Concubine Xiao. Only I deserve that kind of favor.”

“Yes. In the future, you will be the Crown Princess, so it’s normal that Concubine Xiao treats you well.”

Ji Muqing’s ego had been overly inflated by the maid servant's flatteries.”

She continued to pose in front of the mirror, but suddenly, something flashed in her mind. “That’s right! Where is Second Sister? Does she still hide inside her room, not daring to come out since the last time I slapped her?”

The servant thought a bit before answering. “Just now, this servant saw her leave the mansion.”

“Leave the mansion? Where is she going?”

Ji Muqing’s temper flared up. “She must have left to find that tramp! Watch me, I’ll put her in her place when she comes back.”

She threw down the comb in her hand, and it broke as it hit the table.

“Today, an unexpected incident occurred with the letter of acceptance - they didn’t send it to our house. Eldest Sister was incredibly worried and threw a tantrum. Eldest Brother had to immediately go back to the palace. Fortunately, everything was settled. Her Ladyship Concubine Xiao is a really nice person. After investigating it clearly, she ordered people to send the letter and even bestow a jade hairpin to Eldest Sister. The hairpin is a personally-made gift the emperor bestowed Concubine Xiao.”

Ji Yunshu continued to listen. Inwardly, she found it laughable. Who was Concubine Xiao? Knowing her, there was no way that woman can be described as “good.” Since she couldn’t say it out loud, she only smiled and said no words.

Then, she noticed the bruise on Ji Wanxin’s face and the cracked corner of her mouth. She inquired with worry. “What happened to your face?”

At the mention of her appearance, Ji Wanxin lowered her head in a hurry. “Nothing. I wasn’t careful and hit something.”

Do you take me for an idiot?

“Did she hit you?” Ji Yunshu’s question was more of an affirmation.

Ji Wanxin smiled sourly. “You know how her temper is. The Capital is not Jinjiang, so I had to remind her, but I ended up provoking her. Fortunately, the injury is not too grave and I already put medicine on. If you don’t look too carefully, you can’t see it - it’s just like your scar.”

She spoke in flat tone, but she still appeared extremely optimistic. It could make onlookers sympathize with her.

“Second Sister. Although I am no longer a member of the Ji family, you will always be my half-sister. No matter what has happened, I will stand on your side.”

“In this world, the most bothersome people are those who could live well, just like Eldest Sister and Eldest Brother. They can survive easily. Contrariwise, you are not the same. Shen Changqin is a pretty good man. If you can marry him soon, it will be best for you.”

The Ji family wasn’t a place that could shelter people. It was a place where only the strongest could survive.

Ji Wanxin looked down and after a long while she finally spat out, “I know.”

Maybe Ji Muqing doesn't know how to put makeup and ends up looking like this: 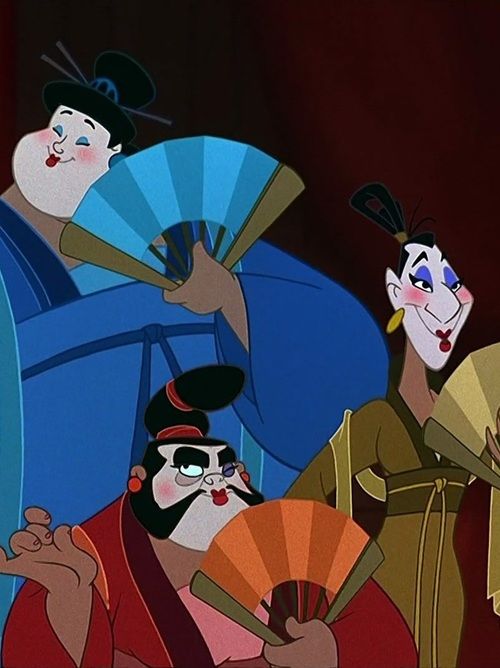