Chapter 117 - You Are a Prince and I Am Concubine-born

Chapter 117 - You Are a Prince and I Am Concubine-born

Ji Yunshu took her two sandalwood boxes that she had left back in the West Side courtyard. One of the boxes contained her calligraphy brushes and paint, while the other had all kinds of knives needed for doing autopsy. These things were all precious tools that she had used to make a living for all those years. She definitely could not leave those things here. Of course, the orange colored jade ornament that Wei Yi gave her needed to be recuperated. She hung the jade pendant on her waist and grabbed the sandalwood boxes with one hand. As for the other hand, it was occupied holding onto a lit candlestick. Coming out of her room, she happened to run into Ji Wanxin as she entered the courtyard.Her body was covered in white mourning cloth, which gave her sickly beauty a touching feeling. The light illuminated her from behind as she walked in. Her exquisite and delicate face was obscured under the mourning hat. Only the red mole between her brows could be clearly seen. She carried on her an aura of indescribable sadness. Her eyes, which reflected Ji Yunshu’s image, was full of tears that could soften anyone’s heart.“Did we have to come to this?” asked Ji Wanxin in a weak voice riddled with sadness as she approached Ji Yunshu.“Ji Pei is dead!” Those words were blurted out by Ji Yunshu.When she heard the news, Ji Wanxin frowned deeply and her tears spilled out in a second. She stretched her hand and met with Ji Yunshu’s ice-cold hand. Her tone dyed with distress, she asked, “You have waited for two years, don’t you think what happened was the worst possible plan?”  “No, for these past two years, I have always firmly believed he would be alive.”“Yunshu…”“Ji Pei is no more and so, is my heart. You don’t need to console me. You should be aware that it’s impossible for me to continue to endure them.” Ji Yunshu was extremely resolute. Her eyes were icy and didn’t reveal any emotions, but her grip on the candlestick tightened.Ji Wanxin’s voice remained stuck in her throat, then she sighed. In the end, she was still trying to persuade Ji Yunshu. “Even though you are now leaving the Ji mansion, needless to say, that leaving in such circumstances is bad. Third Brother just died. Father and grandmother are still grieving, but you came and caused such a disaster. People will label you as unfilial and selfish. With such infamy, it would be harder for you in the future.”“Are you warning me?”“Yunshu, I just want what’s good for you.”“There’s no need for that,” said Ji Yunshu lightly. The next moment, she took off the veil covering her face.

Under the candlelight, her long and red scar glared in Ji Wanxin’s eyes. She had heard of Ji Yunshu’s destroyed appearance, but she didn’t expect that the scar was this terrible. It spread conceitedly on her exquisite face, a gaping tear, ugly to the sight.“This…” Ji Wanxin’s tears continued to flow as she felt sorry for Ji Yunshu.Ji Yunshu coldly chuckled. “This scar represents everything I originally owed to the Ji family. I, on behalf of the former owner of this body, have repaid all those years of grace for bringing me up. From now on, the Ji Yunshu you have known is dead.”

‘No, the real Ji Yunshu had died long ago!’ She had replaced the real one five years ago and had lived like a puppet. But she was now tired and weary. She usually was adept at enduring. However, the moment she learnt of Ji Pei’s demise, her tolerance and endurance had vanished.Ji Wanxin was still contemplating her words. ‘What does she mean by former owner? What is this about dead?’ Her little sister’s words confused her.Ji Yunshu covered herself with the veil again. She avoided Ji Wanxin and walked passed her, but then stopped. Standing behind her, Ji Yunshu asked her, “Do you know, on that year, who revealed my conversation with Ji Pei under the plum blossoms?”Ji Wanxin faintly trembled and slowly answered, “I don’t know.”“You’re not lying to me, right?”“I didn’t.”After getting her answer, Ji Yunshu no longer questioned Ji Wanxin, but left the courtyard instead. Ji Wanxin turned around and only saw a glimpse of Ji Yunshu’s figure draped in her cloak as she gradually disappeared into the distance, still holding the candlestick in her hand. Ji Wanxing gritted her teeth. Her heart was incredibly uncomfortable. The distress in her eyes had long been swept away, replaced by a strong feeling of jealousy and puzzlement. She didn’t understand why Jing Rong burnt the whip, that the emperor had bestowed her father, for Ji Yunshu? For her, he sent Ji Yuanzhi to prison. Despite her scarred appearance, that man still wouldn’t leave her.‘Why?’ Her birth, her appearance, which of them couldn’t be compared to Ji Yunshu?! Even the one who met Jing Rong first was her, not Ji Yunshu! That day, when they had a banquet to welcome the noble guests from the capital, the moment she had laid eyes on Jing Rong, her heart was caught by him. At present, she had fallen in too deep and could no longer extricate herself from those feelings. “Why? Why do you always grab what I like?” Her tone turned sinister and fierce. It sounded extremely treacherous.In the front yard, the whole reception hall was burning amidst a conflagration of fire. Everyone from old to new within the mansion carried in water with haste to extinguish the fire.The coffin was moved outside, but due to the strong fire spreading, it had to be moved away once more. The fire quickly pressed closer to the entrance.When Ji Yunshu returned to the front yard, the mass of people present was busy firefighting and had completely forgotten about her existence, despite her being the culprit of the arson. She watched with cold indifference as the fire engulfed the reception hall. Then, her line of sight moved to Ji Yuanzhi’s coffin. Next, she used force to tear off another white satin banner hanging near her. She threw it on the coffin along with the candle in her hand. The fabric caught fire in an instant! By the time someone noticed what was happening, the coffin was already wrapped in fire.Ji Yunshu straightened her body. Step by step, she walked to the main entrance of the Ji mansion and left. She left with the baptism of the raging flames behind her, like a phoenix rebirthing into Nirvana. She shed herself of all her hesitation and kindness, wishing that this fire would burn every single thing to nothingness! Let the Ji mansion yell, cry, and be burnt!

Lang Po, who was observing on a roof, witnessed the event clearly. He jumped off the roof and dashed to a hidden place near the Ji Mansion to report. “Miss Ji set the mansion on fire, even Ji Yuanzhi’s coffin was burnt to ashes!” He never expected that young lass to be so ruthless!

Jing Rong crossed his hands behind his back as a fierce expression appeared in his eyes. He stated, “Since it’s on fire, don’t be afraid to let it burn stronger.”“Yes, this subordinate understands.” Therefore, Lang Po led several men to sneak into the rear court and the three courtyards located in the south, east and north of the mansion to put everything on fire!

The whole mansion was engulfed in an enormous fire! When Ji Yunshu left, she didn’t go far before seeing Jing Rong waiting for her in the distance.He stood under a shabby lantern. The lantern faintly lit the surroundings, casting a motley of trees shadows to meld with his figure. It made him seem illusory, like a figment of imagination. At this moment, he didn’t have his restrained aura and frivolous expression. It made people feel attracted towards him. Yet, Ji Yunshu remained unaffected. When she approached him, he inquired, “Have you come to a decision?”“Yes.”“Then, anything you want to make clear beforehand?”“I’m bringing Wei Yi with me.”“Sure, I agree. Anything else?”“You are a prince and I am a concubine-born!”

‘You are royalty and I am a commoner!’

Without a doubt, that was her reminder to him. Even though Ji Pei was dead, her heart still couldn’t allow him to enter in. At last, he experienced that feeling of pulling your guts out for someone and still feeling happy.

I have to put a meme for this chapter. [expand] 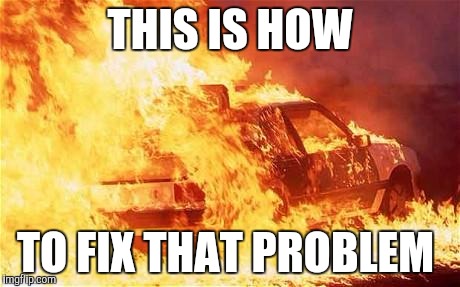